Dr Paul Hartwig  has been in pastoral ministry in Milnerton, Mowbray, Stand and (briefly) in Malelane. He was a lecturer at the Cape Town Baptist Seminary (CTBS) South Africa for six years, where he taught in the fields of Systematic Theology, Church History and Baptist Theology and Practice. Currently he serves as the pastor of Lakeside Chapel in Betty's Bay just outside Cape Town. He is married to Heather.

About my homepage image 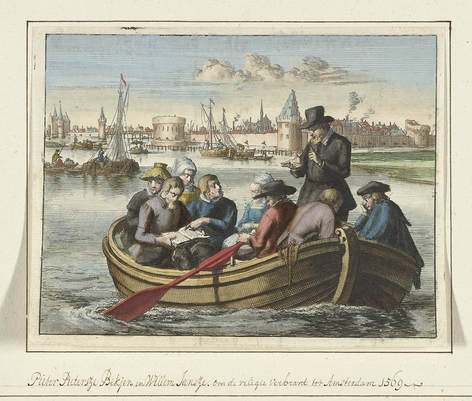 Click to enlarge
​This picture captures something important for me about history, theology, the Bible and the people of God. It is the colored print by Jan Luyken (1649-1712) showing us a secret Anabaptist religious service, taking place in a small boat on the river Amstel. In the background we can see the old city wall, which served to protect Amsterdam from attacks by Utrecht. The accompanying text informs us that two men of this group, ferryman Pieter Pietersze Bekjen and Willem Jansze, were burnt in 1569 in Amsterdam for practicing their faith.Even though the Dutch Republic would gain a reputation for religious tolerance in the seventeenth and eighteenth century (for instance, the Puritans initially fled to Holland before taking off in 1620 to America in the Mayflower), in the sixteenth century adult baptism was considered to be a threat to both religious and civil authority.

Jan Luyken himself had an intense religious experience when he was 26 years old and converted to Anabaptism. He produced a large number of etchings for the 1685 edition of a book called the The Bloody Theatre or the Martyrs Mirror of the defenseless Christians. This book describes the horrible fate of many Anabaptists and relates how Bekjen was tortured before being burnt alive.
Powered by